The Earliest Days of Thunderstik Lodge 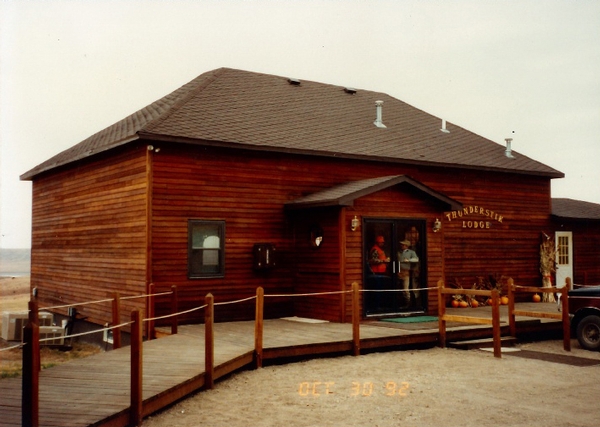 Here is an excerpt from the Thunderstik History Book that we have just published.  We will be publishing excerpts in our blog and the history book will be available in Fall 2021.  Pre-order your book by emailing jane@thunderstik.com

The idea of a commercial hunting lodge in prime South Dakota pheasant country was quite novel in the 1980s. Many of the local farmers guided hunting on the side, or opened their land to paying hunters. But to have a full-time business that catered to wing shooting there?

The idea of Thunderstik first started with Chuck Ross, a former Minneapolis television host. After his years traveling with his outdoors show, Chuck started a small company called "Fishing Travel." They booked Canadian fishing trips, taking advantage of relationships he had developed during his television days. Having grown a love for hunting and fishing as a young man, Chuck's dream was to open a pheasant hunting lodge in the pheasant capitol of North America - in the "Golden Triangle" of South Dakota. He called on his friends, brothers Harold and Bill Becker of Minneapolis, to form a partnership. Having grown up hunting in South Dakota as boys, the brothers agreed enthusiastically.

In 1987, Chuck placed an ad in Chamberlain's local paper looking for land. A magnificent property in the rolling hills overlooking the Missouri River was available, and Chuck fell in love with it. The three bought the property from landowner, Alvin Reuer. They leased additional hunting land, found a couple of buildings they moved to the property, found some local help and dug in to prepare for the first hunting season in 1988.

In one of The Stik's early newsletters, Chuck wrote: "It seems like yesterday that this writer and partners Harold and Bill Becker were having a cup of coffee and talking about the possibility of putting together a 'little hunting camp' in South Dakota."

They called this "little hunting camp" Thunderstik Lodge, soon to be nicknamed "The Stik".

Brothers Bill and Harold Becker had been in the service business together since 1958. Born and raised in Leola, South Dakota, their family eventually moved to the Twin Cities of Minnesota. Bill said, "We started with nothing - and I mean nothing - in 1958." They built Becker Brothers into a very successful flooring company.

Bill remembers the first time he looked at the property that would become the home for their new lodge:

"First time I was out there was with Chuck. We flew out to find the spot where we were going to put the lodge. On the way out there, I noticed Chuck was snoring. He was the pilot! I thought he was joking - but here he had sleep apnea. Finally, I poked him and yelled, 'Chuck!' He was sleeping!"

From the Property Owner's Viewpoint

Alvin Reuer owned the land the new lodge would sit on. The Reuer’s bought their place with its surrounding acreage in 1964. In the 70s, an organization called Burning Brule leased part of their property. It was built as a family recreation campground, along with a gun club.

"We had one of the biggest Trap shoots the state ever had. And we had our regular trap shoots every week. But then the economy kind of went down the tube. It was costing too much and it was too far out of town, so it kind of fell apart," Alvin remembers.

That section of Reuer's land stayed empty for a while. Then they saw an ad in the Chamberlain paper - some investors were looking for land to build a hunting lodge. Alvin's son, LeRoy, answered the ad and Chuck flew out a week or two later to take a look.

The Reuer's sold the property and the Dream now had a home.